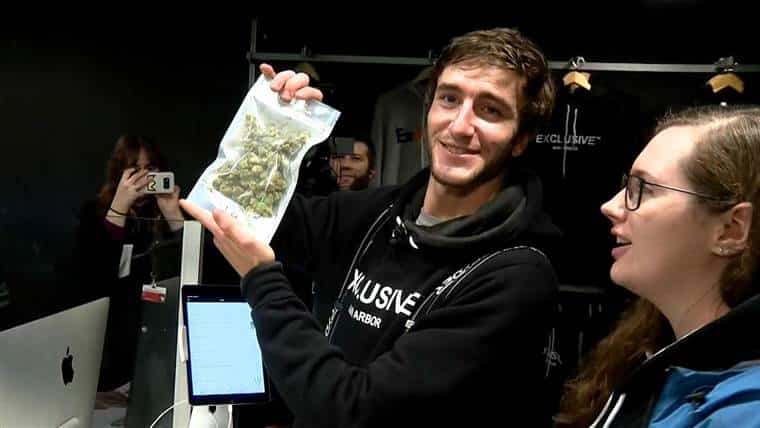 NEW YORK, Dec. 4, 2019 /PRNewswire/ — Over the weekend, Michigan kicked off its recreational cannabis sales, becoming the first state in the Midwest to legalize adult-use. Michigan voters backed the legalization of cannabis back in 2018, marking the 10th state to fully allow the use of both medical and recreational cannabis. State officials issued 18 licenses in total on the first day, including to growers and processors, according to Vox. Additionally, officials also allowed medical dispensaries to shift 50% of their medical supply to recreational if the products have been in inventory for at least 30 days. During the first day of legal sales, Michigan accumulated a total of USD 221,000 in sales, according to The Detroit News, with most of the sales stemming from Ann Arbor. The state stipulates that adults 21 years or older can purchase and possess cannabis. Additionally, residents are legally allowed to possess up to 2.5 ounces in person or up to 10 ounces at their homes. And while recreational cannabis sales might seem minuscule, Michigan’s medical segment has been booming. The Detroit News reported that between October 1st, 2018 to November 22nd, 2019, Michigan generated a total of USD 269.5 Million in sales. And according to mlive, Michigan budget planners are anticipating the recreational market to reach upwards of USD 1 Billion and deliver revenues of USD 1.43 Billion by 2022. In combination with other legal recreational states such as California, Colorado, Nevada, and Washington, the states are collectively delivering billions in revenue. According to data compiled by MarketsandMarkets, the global cannabis market was valued at USD 10.3 Billion in 2018. And by 2023, the market is expected to reach USD 39.4 Billion while exhibiting a CAGR of 30.7% during the forecast period. Global Payout, Inc. (OTC: GOHE), Aurora Cannabis Inc. (NYSE: ACB) (TSX: ACB), KushCo Holdings, Inc. (OTC: KSHB), The Green Organic Dutchman Holdings Ltd. (OTC: TGODF) (TSX: TGOD), iAnthus Capital Holdings, Inc. (OTC: ITHUF) (CSE: IAN)

Michigan’s legalization of cannabis highlights just how fast the industry has accelerated in the U.S. since Colorado and Washington were the first two states to allow legal adult-use back in 2014. However, similar to most regions that begin legalization, government regulations usually tend to disrupt operations. For instance, Canada fully legalized cannabis last year yet still faces regulatory matters such as curtailed operation hours and limited licenses. Subsequently, Canada’s demand began to outpace the supply earlier this year, leading to nationwide shortages. And while Canada has fully legalized cannabis use, the U.S. has still not federally approved cannabis for either medical or recreational purposes. Instead, federal regulators have granted states the jurisdiction to legalize cannabis. And as a result, more than half the U.S. has moved to legalize medical use and just over a fifth have legalized recreational use. And even still companies face many legal barriers. Notably, one of the biggest concerns is securing partnerships or receiving third-party services. For example, many companies hire third-party services, whether it is for marketing, advertising, or shipping. However, due to legal matters, many companies have distanced themselves from the cannabis industry. In particular, many banks have decided to avoid offering services with cannabis-based operators. Consequently, operators are left struggling to manage and maintain their financials. Nevertheless, as the legal industry continues to ramp up, businesses are expected to acknowledge the growth and enter into the marketplace. “The recreational industry, once fully implemented, will have a significant impact on Michigan’s economy, with hundreds of millions of dollars in tax revenue flowing into state and local governments,” said Michigan Cannabis Industry Association Director Robin Schnedier.